if light and sound could speak each others language...

contact us via mail Frank Schulte and David Moss for more information, or to present the fall/winter01 version of “The Acorn Conversations”

“It would be absurd if we did not understand both angels and devils, since we invented them.”
― John Steinbeck, East of Eden 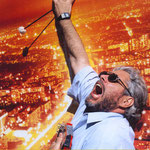 Hear 21st-Century arias, cadenzas, overtures, and emotional song when the "man of a thousand voices" meets "virtual orchestra". It's an evening of wild sonorities in a dramatic scene, performed by Moss and Frank Schulte (turntables, records, samplers) that combines the voices of past, present, future , hi-tech samplers, low-tech vinyl LPs, and the wild drumming and powerful vocals of Moss.

The musical partnership and friendship of Moss and Schulte now lasts for more than 20 years.

They have worked together in several projects and realized unnumbered live performances.

Many of their common work has been released on CD and was presented in several radio broadcasts.

more informations about David Moss can be found here: